CN4 Partners helped elect, either directly or through independent expenditure work, five statewide elected officials including two Governors, two members of Congress, more than 30 state legislators, and more than 50 local elected officials, from Bellingham to Vancouver and from Seattle to Spokane. 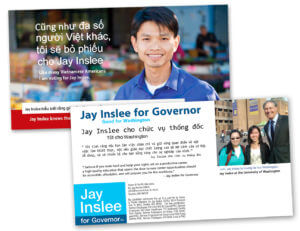 We are the only political consulting firm to have flipped a state house seat from red-to-blue in 2020, electing State Rep. Alicia Rule and defeating Republican incumbent Luanne Van Werven. Despite a challenging election year and coming in behind in the primary, our advertising campaign helped Alicia, a Blaine City Councilmember, win her election in the competitive 42nd district.

We also won the first state house seat in the 10th legislative district in 20 years when we helped State Rep. Dave Paul defeat Republican incumbent Dave Hayes in 2018. In 2020, Rep. Paul was the GOP’s top target and we won re-election, 50.5% – 49.5%, despite Gov. Inslee losing the district.

Most wins in Whatcom County. Ever.